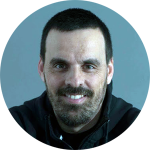 After more than 15 years’ experience as a journalist, especially in the sports field, and more precisely in ACB (Basketball Clubs Association), Roc Massaguer, born in Terrassa in 1977, started uploading videos to YouTube almost by accident, without predicting what was going to happen. He is one of the pioneers of the gamer world in Spain. His channel, Outconsumer, soon became a reference and a phenomenon that allowed him to evolve as a communicator over the years. In 2013, he debuted on La2 with Fiesta Suprema, an experimental show to link YouTube with mainstream TV. Since then, not only has he continued to evolve his channel into a space of reflection, but it has also opened the doors to teaching and conferences, in which he explains his experiences as an influencer and as a father, and the responsibility that that involves, especially to young audiences, the more frequent viewers of YouTube.