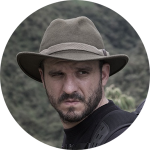 My name is Miguel Gutiérrez Garitano and I was born in 1977 in Vitoria, the small capital of the tiny Basque Country; some say I am a travel, war or conflicts journalist; others say I’m an explorer, because of my hobby, history, and my mania to inquire in every corner of the tree; I’m restless and an open spaces lover (I struggled to stay inside the classroom); when I was 26 years old I obtained my degree in History from the University of the Basque Country (UPV/EHU), focusing this knowledge towards writing thanks to a Master’s Degree imparted by both the newspaper El Correo and the University of the Basque Country. Two trips to Equatorial Guinea in 2003 and 2005, expeditions that I funded thanks to some jobs, resulted in the book La aventura del Muni (ed. Ikusager, 2010). This book was prologued by Javier Reverte, and it’s a hybrid of reportage and poetry; it was, to the critic, a renewal of the travel literature genre. It won me the IV Caminos del Cid Travel Literature International Award, the most important award of its kind in Europe.

Since then, I haven’t stopped traveling or writing. Author, blogger (I run ExploradoresSA.blogspot.com) and freelance journalist, I’ve bylined dozens of reports for magazines (Clío, Distinto, Pirenaika…) and newspapers (El Correo, El Norte de Castilla, ABC…). Moreover, I’ve been news editor and TV reporter at Canal Euskadi; today I collaborate with radio programs about traveling and adventures (Aventureros, La Casa de la Palabra, Levando Anclas, Álava y Punto…), and I look for stories in hidden places and in wars for, among other things, the supplement V of the Spanish regional newspapers of Vocento; I am a travel and exploration book and document collector and my library holds more than 4000 copies today. I give conferences and write articles about the explorers of the 19th and 20th centuries to institutions such as the Royal Basque Society of Friends of the Country, the Basque Studies Society, and the Spanish Geographic Society, among others. I am a member of the Spanish Geographic Society and of the Manuel Iradier Africanist Association. My latest publication is an essay about the history of the exploration, Doctor… I Presume (Ikusager 2013).

After my Guinean experience, South America is the area that has attracted me the most. I’ve lead expeditions to Brazil, Peru, Equador, and neighboring countries in 2009, 2011, 2012, 2014 and 2016. I look for stories to tell and transmit from these hidden places. Stories that have resulted in tales such as is Viaje a los ojos de Wanda, winner of the Mikel Essery Award for the best travel tale of 2012.

My life as a more or less anonym nomad drastically changed in 2015 when I lead an expedition to Peru that discovered an unknown Inca sanctuary and a pre-Hispanic necropolis in the Vilcabamba region; the news of the find went around the world, and it appeared even in prestigious publications, such as National Geographic.