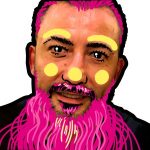 Born, raised, and living in Pamplona. He studied Business Management in UNED, and he has always practised sports–kick boxing.

In 2012 he was diagnosed renal insufficiency; and he was transplanted in 2016. He had to abandon kick boxing… to start practicing other sports.

As soon as he left hospital, he started running… and never stopped. He also does cycling, swimming, and crossfit. He has won several medals at the National Transplant Games, among which stands out a gold medal in Triathlon in 2018.