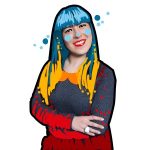 Eneritz is crazy about the technology world since she was a child. After studying computer engineering, in 2009, she started working as a Java developer. Although she liked his work very much, it was rather monotonous and, after two years of programming, she stumbled into the world of software testing, which became her great passion.

She started working at a company specialized in this field and it was love at first sight. Her role as a tester was to ensure that all software did not present any flaws before the end users would find an error, which could have caused big losses for the companies.

In that same company, she met her two current partners and in 2014, she decided to start together with them creating their own company specializing in software testing, one of the best decisions he has made in her life.

Currently, they have offices in Madrid, Barcelona, ​​Euskadi and Berlin and her role within the company is being Service Director, which consists of ensuring that the teams have what is necessary for the projects to go well, increasing the teams according to demand, training new members and dealing with their customers. That does not mean that she has left aside her technical profile, that would never happen!. That’s why she also participates together with the team in research projects in areas such as testing on the Internet of Things (IoT) and Blockchain.