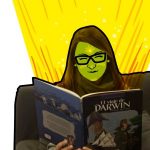 I was born in 1979 in Vitoria-Gasteiz, and I am a vital, traveling and enthusiastic person. I graduated in History from the University of the Basque Country in 2003, and I completed a master’s degree in Library and Information Management in 2004.

Since 2005, I work as a documentalist at the Artium Museum Library and Documentation Center in Vitoria-Gasteiz, carrying out cataloging work, preparing documentary dossiers, and all kinds of activities and tasks related to information management. Thanks to my work I am in permanent contact with the latest culture.

I have always been passionate about archeology, unearthing the history of a place. For this reason, for a few years, I participated in an uninterrupted way in different archaeological campaigns in the pre-historic paleolithic site of Antoliñako koba (Urdaibai, Bizkaia); in the prehistoric deposit of Atxoste (Vírgala, Araba / Álava); and in the Castle of Montemassi in Tuscany (Italy).

In 2015 a new adventure arrived, I was part of the Mars Gaming expedition to the Peruvian Andes in order to delve into the history of the lost Inca kingdom of Vilcabamba, a campaign promoted by the Geographical Society La Exploradora – La Exploradora Gizarte Geografikoa, of which I am a founding member.

My biggest dream has been to dig in the Nile country, Egypt, a place I have visited on different occasions. And finally… my dream came true.

I will be part of the team of the 10th archaeological campaign of the project Visir Amen-Hotep Huy, in Asasif (Luxor), in the Theban Tomb 28, directed by the Institute of Ancient Egyptian Studies. This entity, led by Professor Francisco Martín Valentín and the Egyptologist Teresa Bedman, has almost twenty years of experience in the land of pharaohs, and its contribution to the world of Egyptology will allow us to rewrite lines of the history of this country.