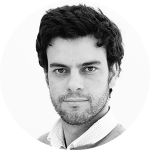 Rodrigo García González has a degree in Architecture by the Polytechnic University of Madrid. He previously had studied in India at the Centre for Environmental Planning and Technology University, and industrial design in Chile. He has post-graduate studies in Umeå Institute of Design, Imperial College of London and Royal College of Art.

He has developed many patents in structural systems and drop-down mechanisms. His works have been exposed at several arts centers such as are Paris’ Cité de L’Architecture or the three editions of the Venice Architecture Biennial in 2008, 2010 and 2012. As a professor, he has collaborated with different institutions and universities such as Cornell University (USA), CEPT (India), Ecoweek (Kosovo), Ilhan Koman Foundation (Turkey), or the VII Latin-American Biennial of Architecture and Urbanism, that took place in Colombia.

Besides, for over ten years, he performs with some improvisation theatre companies. In 2009, he is proclaimed World champion for Spanish language at the II World Championship of Catch impro in Santiago de Chile. Today he is an associate professor of designt at Kingston University and visiting professor at the Royal College of Art & Imperial College. He combines teaching with his professional activity at Skipping Rock Lab, a start-up belonging to the Climate-KIC Accelerator of the European Institute of Science and Technology.