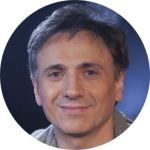 As a humorist, José Mota performs a kind of parody that employs his enormous analytical capacity toward everything that surrounds him, and he brings to life a wide range of different characters. His eagerness to delve into acting has been José Mota’s driving force for years. A high dose of social criticism hidden behind the parody underlies all of his TV shows. As the man himself says, “Humor is the Vaseline that allows us to denounce.”

Known for his television career full of successful shows, he has also starred in movies, musicals, and has brought to life many different characters as voiceover actor, as the Mushu Dragon of Mulan, Shrek’s donkey, and Mike Wazoswki in Monsters Inc. He was nominated for Best New Actor at the Goya 2011 Awards for La Chispa de la Vida, directed by Alex de la Iglesia.