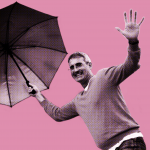 Asier is internationally renowned for his collage caricature of Donald Trump made of banana, chorizo and mortadella. The caricature was exhibited at the Design Museum of London (2018), and was his first viral collage worldwide.

Asier began his career in 1987, at the age of 18, publishing in the newspaper Bilbao. Since then, he has specialized in sports, socio-economic and political humor, publising in salient international media such as are El País Semanal, Reason, The New Zealand Herald, Kronen Zeitung and We Demain.

His works have been awarded at prestigious international events