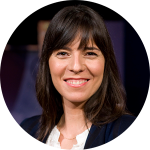 She obtained her PhD in Industrial Engineering at the Industrial Engineering School of the University of Extremadura (2006), with European PhD mention and extraordinary PhD award. She has travelled to a lot of countries and worked in many research centers, such as Center for Self-Organizing Intelligent Systems (CSOIS, USA) and Institut für Robotik und Mechatronik (DLR, Germany), which has allowed her the international dissemination of her research work. In 2010 she received the award for the best scientific publication of the journal Control Engineering Practice, and she published a book titled “Fractional-order Systems and Controls. Fundamentals and Applications”, ed. Springer, highly cited among the international science community. Today she is Director of the Center for Aeronautical Training and Services (CATS) of the Carlos III University of Madrid.

She participates in many radio and TV programs spreading her love for robotics. She equally loves cinema and music, and she has participated as scientific advisor in the movie Automata (2014), produced and performed by Antonio Banderas. She has adapted to English the lyrics of Rosana’s song ‘Buenos días mundo’, which has let her enter the General Society of Authors and Editors (SGAE). She strongly believes all dreams are reachable if one works towards them with illusion and constancy.