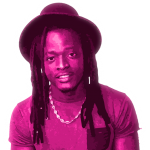 Elhadji Malick Fall, known as ELh Malick, is a Senegalese singer and composer dedicated to music from his earliest childhood. He arrived in Spain 9 years ago and at the age of 20 he self-published his first album in Zaragoza. Now, after a long career on stage, he is about to publish his new album produced in Vitoria, along with a reggae band. His musical style is versatile, the song of the Senegalese and African folklore and the passage by the reggae, the blues and the American folklore always by a unique voice.