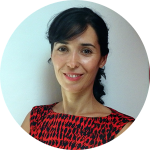 She holds a degree in history, and a PhD. in Hispanic Literatures from the University of North Carolina-Chapel Hill.

She lived in the United States for eighteen years, where she was a professor of Spanish and Latin American Literature at Lehigh University (Pennsylvania), where she also directed the Humanities Center, an institute for research and cultural promotion. Besides publishing various articles in scientific journals, in 2009 she published her first book, Displaced Memories: The Poetics of Trauma in Argentine Women Writers, which analyses the narrative expression of trauma related to jail experiences, torture, and exile in the work of a few Argentinian authors who were arrested and/or disappeared during the Argentinian dictatorship of 1976 to 1983. After the publication of this book, she started researching the representation of violence in culture related to the “Basque conflict”. The result of this research and her own work of memory is El eco de los disparos: Cultura y memoria de la violencia, published by Galaxia Gutenberg in 2016. With her writings, Portela aims to expand the limits of the debate about Euskadi’s recent history, so that the conversation is not restricted to politics or the law, but rather includes affective and imaginative issues, helping us understand how violence has marked and continues to mark our social and intimate relations. She proposes culture (cinema, literature, art, photography) as a tool to ethically face the past and boost a collective memory so as to relate, responsibly and with empathy, to those who have suffered from the violence most.

Portela resigned from her post in the United States in 2015 to return to Spain. She is now full-time dedicated to her writings.