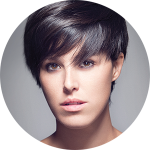 Born in Vitoria-Gasteiz in 1980, former rhythmic gymnast, and Olympic champion in Atlanta ’96, Tania won the Spanish rhythmic gymnastics championship at 14 years old, and became a member of the national team. That year, she was European silver medalist and world champion.

In 1996, she achieved her second world championship and her greatest achievement of her sports career when she became Olympic champion in the Atlanta Olympic Games in the category of rhythmic gymnastics teams. In 1997, she won the silver medal at her second participation in the European Championship.

In 2008, she published her autobiography, Lágrimas por una medalla, written together with the journalist Cristina Gallo.

She is a national sports technician and Pilates instructor. She has established many gymnastic schools and her life has always been linked to sports. Today she is a teacher in gymnastics campuses and she delivers conference talks about knowledge and values in sports.