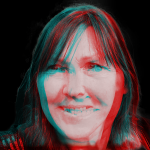 Kat Haber, arrested protesting Federal Energy Regulatory Commission at the end of a walk across America in the Great March for Climate Action in 2014, believes action is what changes neighbors and neighborhoods. In the same year, Kat founded WE Rotary, a virtual eRotary club, focused on another Xistential threat, creating a more peaceful world by eliminating nuclear weapons. She is a Climate Reality Leader mentor for Al Gore, of “An Inconvenient Truth.” Mentoring women leaders in developing nations with World Pulse, she is curious about networks accelerating change.

Organizing TEDx events since 2009 in Homer, Alaska and currently in Vail, Colorado, Kat shares skills of leadership and learning with teams of volunteers and teens. She is daily changed herself and nudged in taking action in fresh ways. She and her teams have produced 200+ TEDx Talks with over 1,000,000 views.

Mrs. Haber serves on the board of WILD Foundation. She was in the second class of female cadets at the United States Air Force Academy.

Doubt & fear do not reside in her. Oh, yes they do! But she acts anyway and calls you to act also for our shared climate. “We need everyone everywhere trying everything as quickly as possible,” she said at the Paris accord signing in 2015. We need to act as though our house is on fire, because “OUR HOUSE IS ON FIRE!”