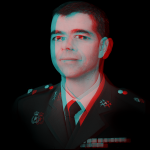 Jorge Ropero is a Cavalry Major. He joined the General Military Academy in 1996 and he became a Lieutenant in 2001.Along his career he has mainly worked for Cavalry Units, being in command in different Units, and for the Army General Staff.

He has also participated in three international missions, two in Kosovo and one in Lebanon.He holds a number of military diplomas such as the Course of General Staff of the Armed Forces, the Course of Chief of Armored and Machined Units for Cavalry Officers, and the Course on Security Chief.

He speaks English fluently and has a basic knowledge of French. As for civil qualifications, he holds two diplomas on Work (2006) and Bussines Studies (2010) by Zaragoza University.

Since May 2018 he has been serving in the Headquarters for the Military Command in Alava, which officially represents the Spanish Ground Army in that province.