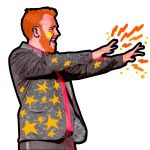 I usually say that comedy is where frustrated musicians go to die. In my case, I had to go through the world of videogames so that the creative frustration reached the necessary limit and the pot exploded in a great explosion of dubious jokes with a bittersweet background.

I have developed videogames, some of international success. I have created and sold programming tools for the most geeks among the programmers, among whom I feel as uncomfortable as in my own home. I have written at least one book, published in 1994, which makes me officially old, and only partially satisfied my creative craving, when dealing with the limitedly poetic assembly language. I have worked for American intelligence writing software to detect metaphors in Persian, I can tell you that the only part that is as cool as in the movies is the paycheck.

Now I dedicate myself to making monologues, usually in English because I am funnier thanks to the accent, and I also dare to pound the piano in public, which mainly speaks of my lack of sense of ridicule. In between these activities that so well nourish the soul, to feed the stomach, I write software to understand what leads gamers to get hooked in such a way. Of course, always with the fear of discovering that it is because the rest of the world has become too bland.