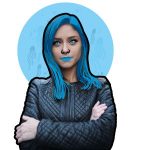 Anelise Borges is one of the most exciting, rising talents in European television news.

Formally based in Doha, Qatar and Istanbul, Turkey, Anelise covered breaking news in the Middle East, Africa and Europe including the War in Syria and the Refugee Crisis.

She is currently Euronews NBC’s Paris Correspondent covering all the major stories on the European continent.

Anelise is particularly interested in migration and integration issues and has recently received accolades for her extraordinary work as the only broadcast journalist aboard the charity vessel Aquarius when Italy decided to close its ports to migrants and refugees rescued in the Mediterranean Sea.

Anelise filmed, edited and reported live from the vessel for the whole period it was stuck at sea. And her work was compiled into the exceptional documentary 10 DAYS AT SEA The Real Story of The Aquarius – a feature-length film entirely shot on Anelise’s iPhone that tells the other side of the story about the men, women and children who risk everything for a new beginning in Europe.