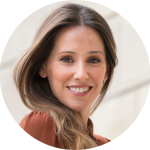 Adela Ucar always dreamt about traveling the world and telling stories. She never imagined she would live these stories herself.
At ’21 Días’, a form of reportage in which the presenter experiences and reports on the different topics in the first person, Adela has experimented with life in prison; in a rubbish dump; she has followed the dictates of the Koran; she has lived in a Mennonite community; she has trained for a boxing competition and to surf the most powerful waves in the world. Twenty-four programs, twenty-four lives. Adela has lived them all, from the inside, only to tell the world.
At 24, she won a Discovery Channel award for young directors and traveled across Papua-New Guinea, Australia, and the Philippines while doing reportage. After being the field producer of several of Ian Wright’s travel programs, she had her first experience in front of the camera as presenter on the successful program ‘Pilot Guides’ for the Travel Channel. Her leap to Spanish television came with ‘Españoles por el mundo’ on TVE1, and then with ’21 Dias’, where she stayed for four seasons.
In 2013, she said goodbye to the program to enjoy the birth of her first daughter. Now she works as collaborator for the program ‘Sin ir más lejos’ on EiTB2, a channel in which she had already had her first experiences as a live set presenter.
Her empathy, spirit of overcoming, closeness, and sense of ease are the trademark features of this journalist and presenter, who is facing her professional future with the hope of living an unforgettable adventure.